The Battle Beyond Planet X

At the Crossroads of Our World and Theirs… 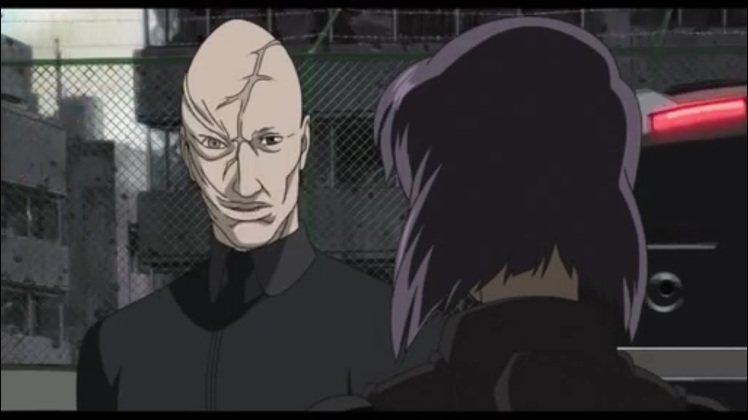 This is an interesting one. In Episode 4, “Natural Enemy,” we have one of the coolest action set pieces the series has on offer, but… not much else. In fact, it’s all setup to that set piece, although we are introduced to one Kazunda Gouda, of the Cabinet Intelligence Service.

Before we get there, let’s check in with the Umibozu, who are conducting some training in the post-apocalypse, which I guess is Dejima, after all. Training simulations are pretty realistic in the future, where androids are apparently inexpensive. But they got the Jigabachi helicopters, and this one try-hard pilot who’s got that perfect pilot mixture of nervousness and aggression. So he has a heart-attack and dies. The AI functions of the Jig turn over to autopilot, and the operators order the fleet back to the carrier. 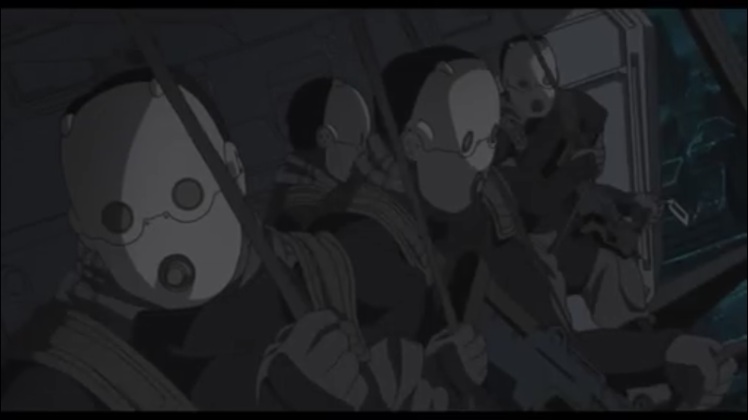 Problem: the machine isn’t responding to stand down because the cyberbrain is still active, and… now it’s classifying the stand down order as an external attack. The other Jigs on the carrier rise of their own accord, and rendezvous with the dead pilot’s.

Now it’s 8:45, and Kobuta meets with Aramaki about the affair. The Jigs are circling over the refugees. We’re telling the media that it’s a mid-air refueling exercise (as if, like those are so common, Ko), but that’s just a smokescreen. What the Umibozu were conducting was the largest live-fire exercise on record, and comes squarely in reaction to the repeal of the refugee policy.

The Chief asks if this is cyberterrorism targeting the support AI. Kobuta says that the staff on the support AI has since been taken in for questioning, but perhaps not. They have no real leads. So the task for Section 9, as they head over, is only to do something about the damn helicopters before they do something more than hover around the radio tower. Like… something to the refugees.

All would be simple but for the Chief’s then chance encounter with Gouda. He says that his name is difficult to pronounce, but he’s found that it’s easy to remember with an association to his face. This guy is disfigured from an accident, but never sought the corrective surgery that’s par for the course in these green days. Gouda here needs a crack team, for he focuses on information analysis and even manipulation of public perception, and would like to forgo the slowness of your majesty the Prime Minister.

What? That’s what the CIS does? And you’re saying this aloud?

So maybe things aren’t all that simple. Like with the hostage situation in the first episode, what will end in a precise action scene has so much political context. It’s just that things are so complex, you can never really go in guns blazing, in however you take that, you have to be smart.

Section 9 begins by surveying the scene, the Jigs at the radio tower. They’ll run out of fuel in an hour. The Tachikoma start chattering. Those helicopters are artificial intelligence like us. Batou says, “Well, they’re support AI.” Maybe they’re on strike, the empathetic Tachikoma posit. But since they’re technically anti-tank, that would make them our natural enemy. 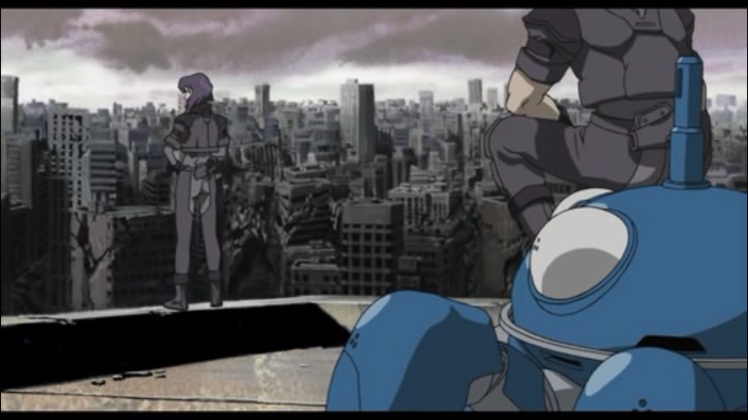 Meanwhile, Togusa and Ishikawa visit the home of the dead pilot. Togusa’s unimpressed. Military pay mustn’t be so good. Inside the apartment, two men in dark suits are planting evidence, including the Individual Eleven logo.

The Chief makes a surprise appearance on the field. The Major makes another reference to the Chief being kept on a short rope, which is like the first time she wondered if Kayabuki would keep them on a short leash. That makes me uncomfortable, the Major. The Chief introduces the gang to his new friend Gouda. Follow his orders. She doesn’t like it, but lets Batou voice the general discontent.

Section 9 rolls out in the Tachikoma, and Batou asks the Major why she’s going along with this. The Major says that they have to do something. She’s into the whole, protecting people thing. Could never be a politician. She checks in with Saito — he’s ready, hanging from a building in a camouflaged Tachikoma, wielding a huge sniper rifle. 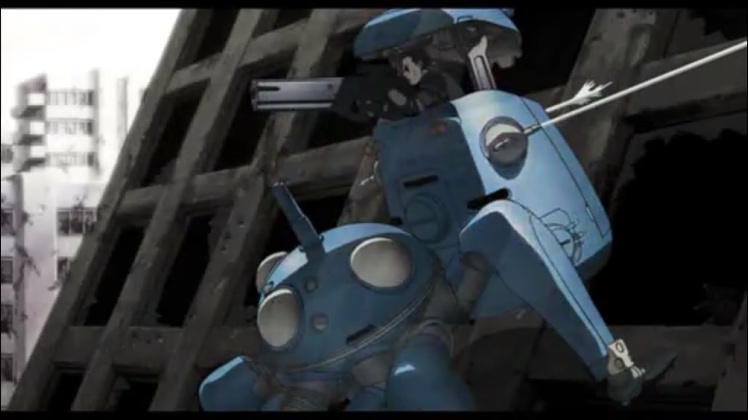 The natural enemies go to war, with the Tachikoma bouncing and web-slinging around the wrecked buildings, across rooftops, through structures frozen in-construction. The Major warns the team not to drop down to the surface — can’t dodge air-to-surface missiles if they get a lock. Their machine-gun fire does nothing, and indeed the Jigs have a higher-calibur weapon.

The Major is being tailed by the target craft — it’s just like Gouda said. See all this fun jumping around was more gathering of intel. They need to get this one alone, and lead it into position, and the details of this plan are revealed as they play out. 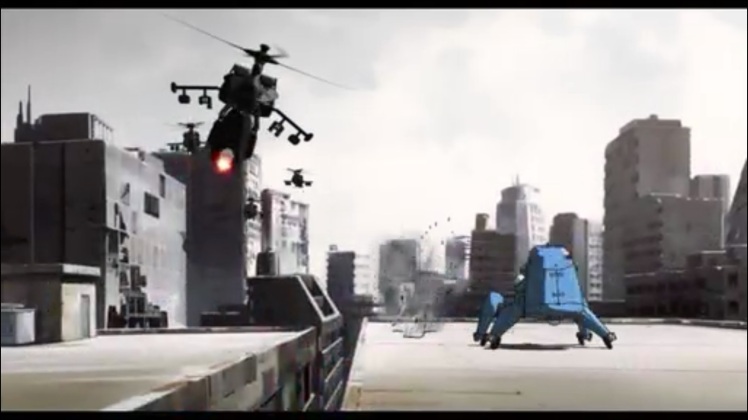 Saito tells her to lift the Jig’s chin, because he wants to put a round in the pilot’s brain so he can deactivate the lock without destroying anything. This prompts the Major, in the Tachikoma, to land on a roof and immediately pull backward, ass to cover, which kicks up some dust, and this dust is blown away by the Jigabachi overhead. This moment gives us a quick idea of just how much more formidable the Jigs are over the Tachikoma.

She shoots out her Spider-Man webs and latches onto the Jig, but can’t get it to lift its front. It turns around, and shoots up the Tachikoma. Those cruel animators. They love shooting up the Tachikoma to hell. The Major pokes her head out, and detaches the web shooter from the broken philosopher-machine-child, goes for a fly.

Now hanging onto the web attached to the helicopter, the Major puts her foot down and tries to wrangle the helicopter on her own: 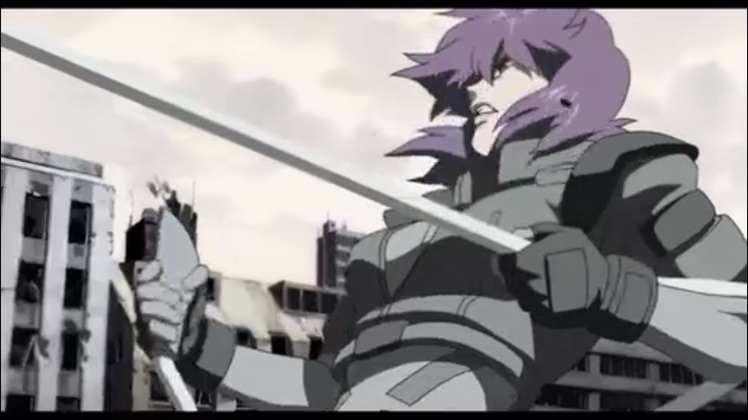 We bask in her glory for a few moments before she lets go, and Saito makes the shot. Now, this is a scene reminiscent of the helicopter scene of the original Matrix, so what we begin to see is something of an exchange tradition in the style of Jidageki/gunslingers: John Wayne to Yojimbo to A Fistful Dollars to Sukiyaki Western Django. The Matrix was pitched as a live-action version of Ghost in the Shell, and now with 2nd Gig, a year after the close of the trilogy, we have another homage, though it’s certainly more subtle.

It’s a perfect sequence, absolutely thrilling. For all her contribution to the feel and impact of the show, Yoko Kanno is not praised nearly enough here, and with “Cyberbird,” she kills it. It’s tactical cyberpunk action, but set to the high notes of a beautiful voice, the mysterious Gabriella Robin (who many have speculated is Kanno herself).

Gouda tells the team that he’s glad his predictions paid off, that killing the cyberbrain would allow the stand down order to go through. Now the police don’t have the dishonor of killing one of their own. Whoa, Batou says. So Saito does your dirty work? Kinda like that time, that every time, that we do the dirty work — but this is different goddamn it! Batou, it’s okay, Saito says, looking like a chill motherfucker. I’m used it.

A kid throws a rock at military armor rolling through the refugee town. The Major reports Togusa’s findings, and the Chief tells her that it’s suspicious. The CIS showed up as if they knew everything. Meanwhile, the GSDF are circling refugees like vultures, causing unnecessary strife. This could be the groundwork for a huge crime they can’t even see… 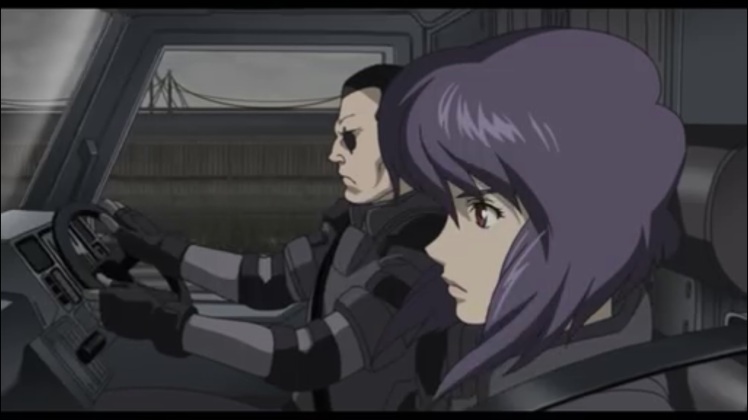 The episode’s title is taken from the Tachikoma discussion of the helicopters as their natural enemy, and the Jigabachis are very interesting to me. Compared to the likes of Terminator, or even Appleseed, the Ghost in the Shell’s rendition of killer robots is pretty sedate (but still, exceptionally designed).

That it uses hyper-advanced helicopters and not something more akin to the Hunter Killers from the Terminator movies is a characteristic, but slightly frustrating choice. It’s the only franchise that would choose to portray an out of control artificial intelligence in such a… grounded way.

There’s ups and downs to this. It keeps the focus on the political dimension of the show, where these Jigabachis are important, but they’re really just the forward extension of some grand conspiracy, that which is only beginning to rear its head. The CIS are a new element in the mix now, and we see their manipulation in action, even if we don’t immediately connect them to the suits at the dead pilot’s home. Things are brewing.

For now, we remember the great menace of the Jigabachi, who may one day return… But I make no promises.

Or send an email to this emale